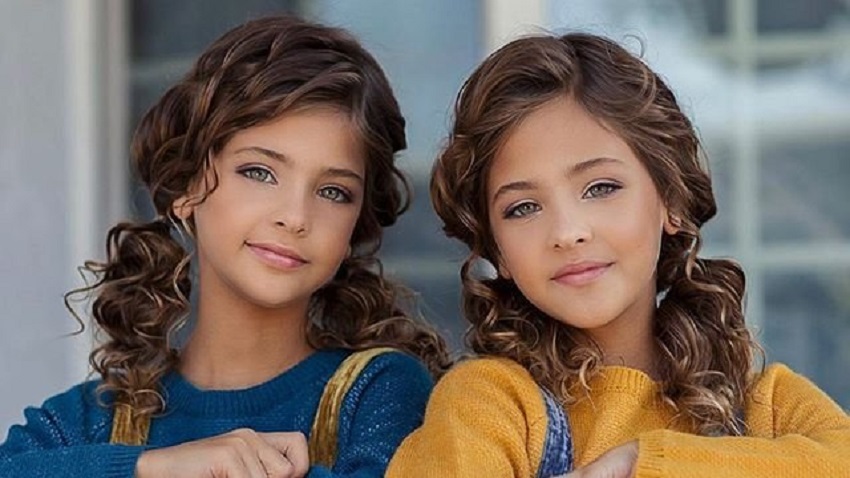 The protagonists of this story are two little girls, two breathtaking twins: blondes, blue eyes, and perfectly identical, they are Leah and Ava Clements, small but already real stars for millions of fans.

Even when they were very small they received many compliments for their appearance, more than every child usually receives, and so the mother started did not miss the opportunity to direct them, right away, towards the path of success.

Thanks to the great beauty of the twins and a bit of luck, which never hurts, the little ones have become real stars of the web and beyond.

In fact, it is not uncommon on the internet to come across girls who look like little models, especially on social networks, just think of Thylane Blondeau who is considered the most beautiful girl in the world, and like her, even the little Clements will leave you speechless.

Let’s find out how they became the most beautiful twins in the world:

The most beautiful twins in the world, Leah and Ava Clements were born on July 7, 2010, in California. Thanks to their mum they have become stars. In fact, Jaqi Clements immediately noticed the extraordinary beauty of her daughters and, as soon as they were born, she signed a contract with a modeling agency. But success came only a few years later.

As you can see in the following image, the girls, who pose together with their family and older brother, have grown more and more beautiful and, when they turned 7, their mother created a profile for them on Instagram. This has immediately depopulated and so Leah and Ava have become two little stars, in great demand from the world of fashion and advertising, as well as very popular with fans.

The little twins are wonderful, of course, but looking at them you can’t help but notice how they are a perfect mix between the two parents. Their mother, Jaqi, in addition to being their manager, often poses with their daughters in photo shoots. The magnetic ice blue eyes, however, are all from his father, undoubtedly a man who stands out.

4) Two wonders, from an early age

There are few public photos of Leah and Ava before the age of seven (below we see two, very tender) when they began to pose and work as models. However, many have criticized the family, and especially the mother, for introducing her daughters to the world of fashion at such a young age. “ When they accuse me of not letting them live as girls like the others – says the mother of the twins on her blog – I get angry because other people’s children spend hours in front of the TV or iPad, mine dance, swim, and model. What’s wrong with that ? “.

In fact, the mother, in addition to the swimming and dance lessons that the twins were already taking, suggested that the little ones try to enter the world of social networks. The idea was immediately taken with great enthusiasm and so the girls, between a photo posted on Instagram and a photo audition, have established themselves as the most beautiful twins in the world.

Jaqi confessed that he believes a lot in luck and that the number 7 is related to good luck. For this reason, she thought that precisely that age of the twins could be the right time to break into the world of fashion. So it was and Leah and Ava achieved truly unexpected fame in a very short time.

A few years have already passed since the first shots and the first smiles, but the little ones have kept their extraordinary beauty, in fact now they work with two fashion agencies. In addition, the Instagram profile has more than 715 thousand followers. But that’s not all, because they are not the only stars in the family.

8) Watch out for the Clements brothers

The girls have an older brother, Robert, and, as good blood does not lie, he too is very handsome. So the young Clements started to follow in the footsteps of their sister’s minors and has since appeared in some photoshoots.